To say that Sierre-Zinal is one of the greatest mountain races in the world would be an understatement - that would allow for the possibility of another race squeezing in there to bask in the light. It is the greatest. "It is to mountain running what the New York Marathon is to Marathons". Just as it has elevated some of the best mountain runners in the world an almost untouchable realm, it has humbled many others to the point of tears.

If ever there was a middle ground in mountain running, this is it. it isn't short and it isn't long. there are sections where 10-minute-miles would be record breaking and other sections where 5-minute pace would be pedestrian, at best. ups, down, rock, pavement, scree. as british mountain running legend, Billy Burns, put it: "there is no faking it at Sierre-Zinal"

there is no doubt that mountain running is segregated. between long distance, short distance, ultra, marathon, mountain, trail, europe, america, carpenter, krupicka, wyatt, skaggs', killian, sky races, grand prix, mountain cup, mountain championships, wmra, atra, usmrt, nacac. i could go on but i won't. when one becomes unemployed and finds himself talking entirely too much about mountain running (your humble narrator) the subject always arrises - who's the best? who's the fastest? who's the strongest? Before this year I'd have said that the course was too short to hold any sort of advantage to the "ultra" folk. This year, my opinion of that has changed. Sierre-Zinal is truly the Mountain Running Medium.

In an effort to document the "scene" here in the Alps, I have been interviewing various runners this summer. I had the opportunity to talk to Killian Jornet Burgada, of Catalonia, before the race. Though he is most known for his 2008 record setting win of the Mont Blanc Ultra (186k/115m) his accomplishments go far beyond. He recently ran the GR20 (corsica coast to coast - 180k) in 33hrs (fast hikers tend to take 15 days). He has several Sky Marathon wins to his name and he is only 21-years-old. When I asked him what he though of the course the day before the race, he said he liked it even though it was "so short". Though nobody discounted him, I think few put money on him for the win.

The race started off just as it did a few years ago - sub 2:10 ethiopian marathoner in the lead... that is to say way in the lead. i learned my lesson two years ago and did not chase him. time-wise the sierre-zinal is longer than a marathon. When they say in a marathon that the real race begins at mile 20, at Sierre-Zinal the race begins at Weisshorn. For the first quarter of the race i remained outside of the top five. To my surprise, Killian took the lead for the chase pack, sometimes running, sometimes walking (you've never seen anybody walk uphill like he does. it's like paul bunyan or something... a lumbering giant, then shrinks down to a normal, guant runner again). I lost two places on the first little downhill running into the small village of Chandolin (9th place). Two years ago, I chased after them. This year I knew that the race wouldn't begin for another 45 minutes. They came back to me in time - a Colombian and a Catalonian. Having never run the race before, the Colombian asked if we were at Weisshorn, which was as much a sign of defete as limping. I reeled the leaders in slowely but surely. 20k into the race I passed the Ethiopian that had been so far ahead and by Hotel Weisshorn first place was essentially shared between Killian, Tarcis Ancay (SZ), Florent Troillet (SZ), myself and Robert Krupicka (CZ), whom I've battled so many times over the past few years. (Robert, in fact, was widely regarded as the favorite for the race.)

I'm all for believing in yourself and whatever else they teach you in positive affirmation seminars but I knew that once the downhill began I would not be able to keep with Killian. I've seen him run downhill before. He disconnects himself from his body. At the moment, all I could think of was "I am in the lead group of the Sierre-Zinal". The moment the downhill began, Killian and Tarcis took off. I tripped and fell. Then I lost my shoe to a mud bog (retrieved, but not without a muddy sock). Then I tripped again. After that I slammed into a hiker, with the full force of my body. I'd have made Dick Butkus proud. With 4k to go I found myself in 4th place with Robert Krupicka not far behind. I started making faces. It seemed to help. Faces that people make when they're in either in a lot of pain or discust or somewhere in between.

I held Robert off until the finish. He came across the finish line 15 seconds behind me. There was a large red cloud at the toes of his left shoe. He had kicked a rock about an hour earlier during the race. 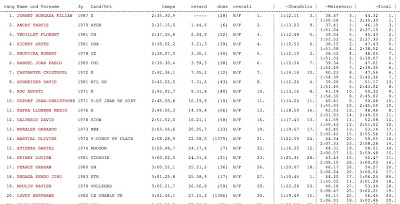 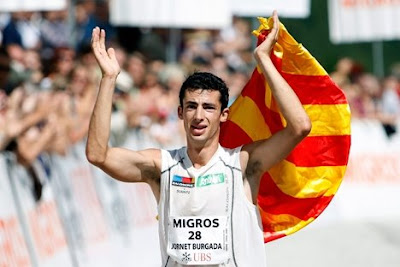 Post race festivities included an awards ceremony attended by no less than 3000 people. I sat with American Running legend and four time winner of the Sierre Zinal, Pablo Vigil. They called him up on stage for reasons that I didn't understand. I asked somebody nearby and they said quite simply "he's a celebrity here". 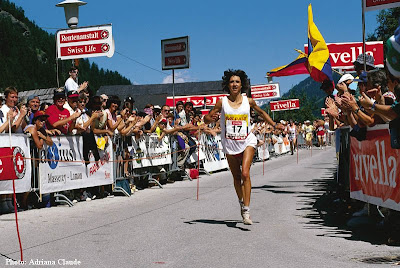 One of Pablo's fourn consecutive wins.

Being slightly technophobic, Pablo does not have a blog of his own (though he should) he has agreed to a guest posting with lots of character.

On the women's side, Anna Pichrtova won her fourth consecutive title. Brandy Erholtz posted the top American time ever with a 5th place finish.

Prerace video from two years ago can be found here. You get to hear what I sound like dubbed over into French.

And a race video here:

I've made my way back to Geneva where wonderful mail and other comforts were waiting for me. Wednesday, off to Norway for Skaala (http://www.skaala.no/).
Posted by Mostly Paved at 1:04 PM

Great story, and excellent performance. You have to love the drama in european mountain races. The competition, the spectators, the courses... just awesome. I hope i run Sierre-Zinale some day before i'm old and gimpy (if it's not too late?). Way to go, Rickey. Awesome reading.

It is a pity that you didn't add any picture of the actual mountain. It would be nice to check them with my friend on cost per head community that we are really into hiking.