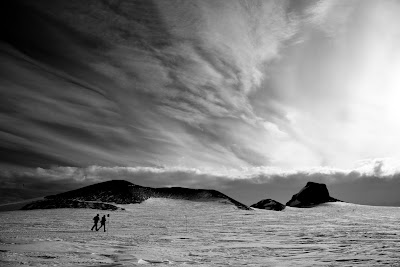 I was in the desert the other day. South of Moab, where a friend owns a small piece of property with an Airstream trailer that hasn’t moved in 20 years, I realized that I’d hardly been in a single spot for over a week in nearly three months. For a brief moment, I actually felt bad for myself as the constant moving has had an effect on my that’s somehow not fatigue, but something more like numbness. Four continents, four countries and one non-country. But I quickly reminded myself that none of the places I’ve been have sucked.

In January, myself and three others were scheduled to fly from the South Pole Station to McMurdo Station (on the coast) to compete in the Antarctica Marathon. A friend and former winner of the Marathon flew out on a Friday for the race on Sunday. By late Friday night, all Saturday flights scheduled to fly in or out of the South Pole were cancelled, dashing any hopes to compete in the Marathon.

When life gives you lemons…

With the help of several people around the station, we designed a Marathon course around the South Pole Station. The surveyors helped us get an exact distance (Start at the South Pole, run once around the Station and five times up and down the airplane ski-way, finish back at the Pole). Official timers, aid stations (this was no more than a duffel bag at the end of the ski-way complete with hand-warmers, hot broth, hot chocolate, a two-way radio, a sleeping bag and a small toilet bucket which, thankfully, was used minimally), photographers, etc made what we had dubbed the South Pole Contingency Marathon.


The temperature remained steady at about –18f for the duration of the race. The wind, however, brought the chill down to –40f/c or colder depending on which direction you were heading on the ski-way. Several people joined us for the first few miles of the Marathon and even more showed up at the finish. The station manager approached me after the race, very excited, saying that he thinks this might become a tradition. I said, god I hope not.


Though I appreciate the distinction that goes along with the race (2nd marathon ever to run at the South Pole – check out www…. to see a disastrous first marathon run by Dean Karnazas and three others in 2002), I really had my mind set on the McMurdo marathon – running on sea-ice, past penguins, volcanoes, in relative warmth (they were running in t-shirts!)- and still hope to someday be able to compete in it.

Good write-ups on the Marathon:
From Marco
From Pablo

New Zealand
I left the South Pole on the 15th of February. First flight in, (2nd to) last flight out. From the LC130, I waved goodbye to the winter-overs, who would not see another plane come or go for the next eight months.

I was fortunate enough to have a one-night layover in McMurdo before continuing on to New Zealand. I made the most of the 24hrs I was there and ran nearly every trail that McMurdo has to offer – most with Christina Knoblocker who was also scheduled to run the McMurdo Marathon but had to run the South Pole Contingency Marathon instead (becoming the first and only woman to run a marathon at the South Pole). We ran to Scott’s Hut, Castle Rock, towards Mt. Erebus, along the sea-ice (where, after four months on the continent, I finally saw some fricken penguins!) and back to McMurdo. I attempted and broke the FKT up Observation Hill (former record 7:07 or 6:40 depending on who you talk to. I ran 6:06. It’s a hill – these are minutes and seconds, not hours). I drank Laphroig at $3/shot late into the night and bid farewell to the continent I called home for the previous four months. 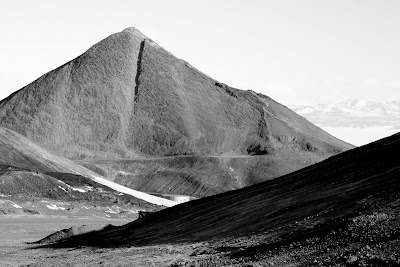 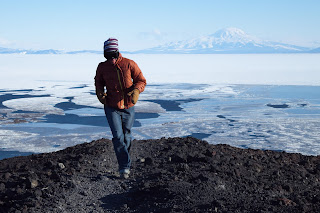 Waiting for me in New Zealand was my trusty steel-frame Trek 500 laden with panniers full of camping gear and extra clothes. I was soon on the road heading south out Christchurch with nothing on my mind but covering miles and miles. Having been deprived of vegetation, warmth, humidity, smells and wildlife for 1/3 of a year, I had every intention of running wild like a madman along world famous trails across the South Island, which, given the contrast of the two landscapes, is a perfect recipe for an immediate injury. I tweeked my Achilles’ tendon only three days into my trip. The pain prevented me from running again for the next five weeks. On the bike, the pain was mild and manageable so I continued on and rode 1300 miles before returning to Christchurch. 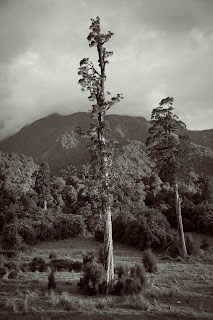 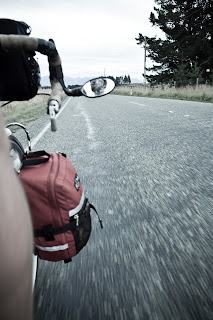 State-side
I returned to Aspen with bald tires and an itch for skiing. I dusted off my Hippy Stinks and managed to get in five full days of telemarking in before heading to Boulder where my trusted masseur had my Achilles’ feeling better in a matter of several painful minutes.

A run up Green Mountain with Dakota Jones, Scott Jurek, Joe Grant and Geoff Roes the following morning had me wishing a little that I’d have not pulled up my roots from this town – a town that has served as the American Mecca for cycling, climbing, collegiate running and now trail/mtn/ultra running. I returned to Boulder – the others continued on to Nederland, some 25 miles up the trail.

France
I arrived in Nice at the beginning of April and was quickly brought to a small village an hour’s drive down the coast where Salomon was hosting a fifth annual “Advanced Week” where several Salomon runners from across the world congregate, check out the newest shoes and products and give feedback – what we’d like to see for future products. It must be said that there are few programs that compare to this – where an athlete gives a suggestion and the results are visible in the product the following year. 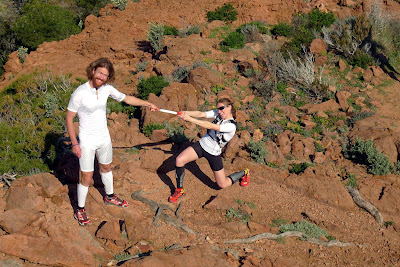 My Achilles’ felt better throughout the week, running along the Mediterranean, amid Herbs de Provence. I raced a fun, bush-whacky 29k on Saturday, finishing in abnormal heat (90f) coming from very far behind (70th place at 5k) to place 4th. On Sunday, feeling a bit better, I ran a 21k race with several other members of the International Salomon Team, finishing second behind none-other than our very own team manager – a former Mountain Bike Racer who’s been doing a lot of closet training.

Mexico
I returned to Boulder for a few days before getting back on a plane for Mexico where I met up with a long-time friend for an eight-day run-around. It is safe to say that we redefined what is possible to accomplish just over a week in Mexico. We visited three Pueblos Magicos, climbed two volcanoes over 15,000ft, visited three museums (Kahlo, Rivera, etc) drank much mescal, ate many tacos, quesadillas, chile relleños, attended a brutal bullfight and managed a very solid week of fast and numerous miles. 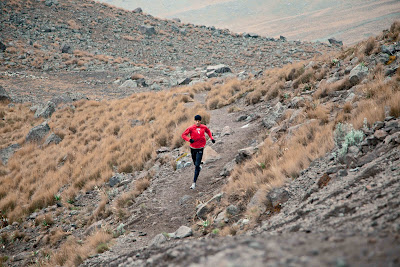 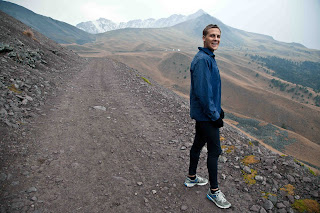 Home
So now I’m at home, trying my best to stay put.

Some changes that I’ve been contemplating for this coming summer: I will again be pacing Killian Jornet at Western States. I will be pacing Julien Chorier at Hard Rock. I will be returning to Mount Washington in June to try and better my time. I will be returning to the Vail Teva Games for the 1/2 Marathon and 10k. In August, I'll be pairing up with Anna Frost to compete in the Trans Rockies six-day stage race. Lastly, I will be competing in my first ultra – the 80 mile Canadian Death Race in Alberta Canada. To prepare for it, I have grown out my hair and beard, painted my toenails and upped my miles.

Oh my... WANT! WANT! Seriously, sounds like an incredible time and living life to the absolute maximum.

awesome report and great photos! See you on 'the hill' in June!

"To prepare for it, I have grown out my hair and beard, painted my toenails and upped my miles."

All keys to success, undoubtedly. Good to see that one of you Salomon athletes has the stones to keep it real. The contrast with white compression-wear ought to be glorious.

Dude, next time you're back in Boulder let's jog up a couple peaks. I think I'm finally rapidly approaching true health.

Always love reading about Gates' adventures. If you do a TT up Green, let's get a watch on it this time.

@tony: salomon makes the only pair of shorts to accommodate such stones (ask jlu). yes they are white and yes they are tight. but certainly not to be confused with tighty-whiteys. i'd love a jaunt up some peaks.

@gz: there was a watch on the last ascent. mackey was wearing it, exactly three minutes behind me.

Hey - RG, sorry if my comment came across as snooty. You ran sub an hour on the big hill that year so as far as I am concerned, you could time your runs up Green with a sextant and I'd say it is good.

ha! i didn't interpret it as snooty at all. i made a point of NOT wearing a watch that day, just to see how a round-about time would be interpreted.

@Anton @Rickey- please leave me out of any conversations and/or design modifications regarding tighty-whiteys. Thank you very much!

Those are great pictures. The one that I like the most. it is the one from the back mirror of the bike.
pay per head bookmaking